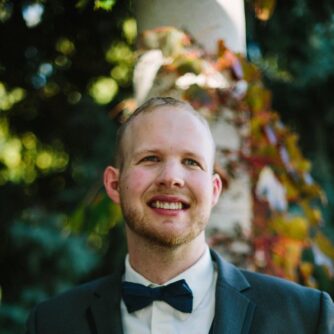 Sean Lockard-Trumpet, Trombone, Euphonium, Tuba
Sean is a graduate of the University of Nebraska Omaha and is currently a 5th-8th grade band teacher for Music in Catholic Schools. During his time at the University of Nebraska Omaha Sean was principal euphonium for the Symphonic Wind Ensemble, and played trombone in the jazz bands. Sean started teaching in 2012 where he was the Instrumental Music Director at Omaha Benson High School. While there he started a beginning band program and doubled the number of students involved in band. In 2015 Sean was awarded the Benson High School “Teacher of The Year”.
As an educator, Sean wants his students to develop a strong fundamental base where they can grow into their full potential. Sean is a low brass specialist that has performance experience on trombone, euphonium, and tuba. Currently he plays euphonium for the Omaha Symphonic Winds, and has played trombone and tuba with the Nebraska Wind Symphony.