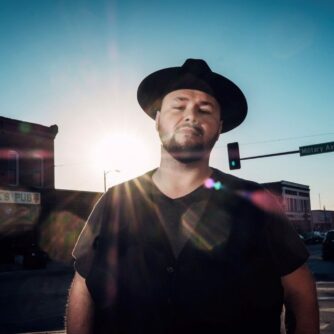 You might be forgiven if you think Hector Anchondo just blew up out of nowhere. In the last two years, the Omaha guitarist has landed on everyone’s radar, with all the markings of becoming the “next big thing.”

It is said, though, that behind every overnight success is a decade of hard work. Behind Hector Anchondo is more than 25.

As a high school student in rural Missouri, Hector already knew he wouldn’t follow the traditional track of college and career that many of his peers had planned. He was determined to play music as a vocation no matter what it took.

He founded a rock band called Anchondo and for a decade toured the Midwest, living almost entirely on the road. The band grew very popular, but Hector knew something was missing. He loved playing blues guitar, so he started sneaking a few blues songs into his sets. Not everyone was happy.

“Some folks that became upset because I wasn’t sticking to just the songs,” said Hector. “That broke my heart, but I decided that I was going to do what my heart was asking and switch to the blues and really let my guitar loose.”

He left his long-time band and moved to Chicago for a year to learn what he could from the masters there.

Over the next few years, Hector strung together a long chain of accomplishments. He put out an album on a friend’s label. It did well, so he made another. That, too, sold well at shows and won praise in the Midwest.

His band won the right to represent Omaha’s powerful blues society at the International Blues Challenge in 2015. They made the semi-finals. Then, the following year, they made it to the finals and won third place. Opportunities began to pour in. Anchondo got to appear on festival line-ups with legends like Coco Montoya and Magic Slim, and he won endorsements from major music equipment makers including GHS strings and Delaney guitars.

The next album, 2016’s “Roll the Dice,” was a breakthrough. The album was released to radio stations and press outlets worldwide, and a tide of enthusiasm from blues enthusiasts, critics, and blues radio show hosts swept Hector to international attention.

The album leaped to the top of blues charts, including the Top 25 on the Living Blues chart, and spent many weeks on the Roots Music Report blues and blues rock charts. Critics fell over themselves to heap the album with praise, calling it “fabulous,” “inventive,” “magnificent,” and “absolutely beautiful.”

Then, in 2020, Hector entered the International Blues Competition as a solo artist, just him and his guitar.

He not only won the IBC, but he also won the Cigar Box Guitar Award, given to the best overall guitar player out of the 400 or so acts from around the world who enter each year.

Joining the small, elite circle of IBC winners is a career-making moment. For Hector, it also validated that choice he’d made back in high school, to follow his passion no matter the cost, and all the tough choices ever since.

“Winning this feels like a reward for having stuck with music for 24 years,” Anchondo said. “I had flashbacks of all the journeys, sleeping on floors, years of sleeping in the van, overnight drives, no pay, credit card debt for the cause, broken-down vans, the list goes on.”

Now, is tours cover the entire US and Canada. He has been nominated for all of blues music’s top awards, include the BMA, the Independent Blues Music Awards, and the Blues Blast Awards. He cracked the Billboard Blues Chart with a #11 hit record with the most recent “Let Loose Those Chains.”

And in 2022, his hometown of Omaha showed their continuing love for the local guy who is becoming a legend, honoring him in the city’s Arts and Entertainment Awards as Artist of the Year.

“I’m proud that I never gave up,” Anchondo reflects now. “There were times of self-doubt and even a couple times where I questioned if I should change my path. My love of music and performing kept me focused on the blues path. My goals are to keep pushing myself to be a better musician, to push to keep growing so I can pay my bandmates more. Most of all, to keep making people happy so they can forget about all the day-in and day-out complexities that make up our daily lives.”