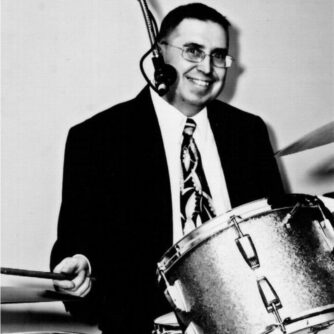 Kevin Kroon, a native of Lincoln and a graduate of the University of Nebraska, has been playing drums/percussion professionally since 1975, and teaching percussion lessons for Dietze Music since 1985. Kevin teaches beginners to advanced players; snare drum, drum set, mallet percussion. He has also taught percussion methods and private lessons as an adjunct professor at Union College in Lincoln, Nebraska. Kevin has given percussion clinics and instruction at various times for the Lincoln Public Schools (LPS) and has been an adjudicator many times for the LPS Middle School Solo Ensemble Festivals. Kevin served 36 years with the 43rd Army Band of the Nebraska National Guard and retired from the United States Army with the rank of Sergeant First Class.

While focusing on the fundamentals of technique, Kevin strives to introduce the student to different styles of percussion to enrich their musical experience. He holds the philosophy that there is never only one approach to a task, so he provides his students with various methods to approach a musical situation, develop their abilities and achieve their musical goals.