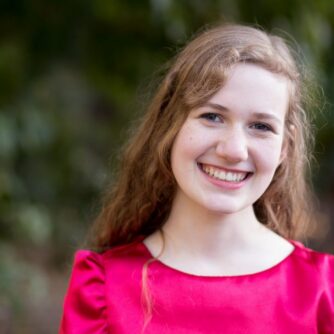 Mary Dowd is a vocalist, violinist, and violist based in the Lincoln area. She loves playing and singing in ensembles while making music in every time period from Medieval to Contemporary. Mary has been teaching voice, upper strings, and piano in her private studio since 2013.

Mary first became interested in music at the age of 7 when she started taking private viola lessons and piano lessons a year later. When injuries prevented Mary from playing viola and piano, she started voice lessons because she couldn’t imagine life without music. Throughout her schooling, Mary was very active in music ensembles YES, JYO, and LYS, where she was a senior soloist. She also participated in many honor choirs and honor orchestras, including All-State Orchestra and All-State Choir. Throughout her collegiate career, Mary participated in 6 choirs, orchestra, chamber music, opera, and musical theatre. Her favorite memory from undergrad was singing and acting on stage and then hopping in the pit to play violin between scenes in the musical Violet.

Mary holds a Bachelors of Arts in Vocal Performance with a minor in Political Science from the University of Nebraska-Lincoln. During her time there, Mary competed and placed in NATS and was a finalist in the Glenn-Korff Concerto Competition.