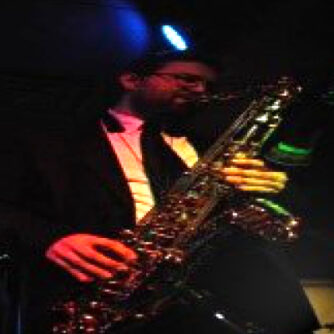 Bob Brown has taught at Dietze since 2007. Bob holds a Masters of Music Performance from the University of Nebraska Omaha (UNO). During his time at UNO, Bob was a member of Jazz Ensemble I and II, Symphonic Wind Ensemble, Saxophone Quartet, and Hockey Pep Band and Jazz combo. While at UNO, Bob was a member of ensembles that were chosen to perform at the Nebraska Music Educators Conference, The University of North Texas Jazz Festival, and at the 60th Anniversary of the D-Day invasion of Northern France in Normandy.

Since graduating, Bob has worked as a freelance musician as a Member of the Omaha Musicians Union and as an educator and clinician. He has performed with: The Jazzwholes, The Marcus Lewis Quintet, Mike Gurciullo’s Las Vegas Lab Band, Steve Shiniger and the Shin’s Sings Orchestra, Message in the Bottle: The Police Tribute Band, Omaha Big Band, Karin Allyson, The Confidentials, The WGO Soul Orchestra, in the Omaha Community Playhouse’s production of Swing!, as well as many others. Bob has been a student of Norm Edwards, Tim Brechbill, and Darren Pettit. He has also taken lessons with Frank Basile of Michael Buble’s Band and the Vanguard Jazz Orchestra of New York City as well as Eric Marienthal, saxophonists with Chick Corea and lead alto saxophone for Gordon Goodwin’s Big Phat Band.