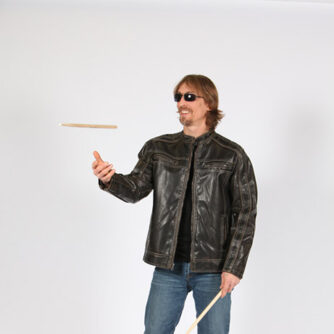 Todd Roberson boasts one of the Nebraska’s most impressive musical resumes. His career has spanned more than three decades as a drummer and nearly twenty years as one of the state’s most respected instructors. Todd’s absolute commitment to technical excellence and professionalism has earned him a reputation as one of Nebraska’s true greats. Todd’s dedication to his craft has allowed him to seamlessly master multiple playing styles, making him an accomplished rock, metal, country, blues and jazz drummer. His technical prowess is matched only by his enthusiasm and drive to continue to develop his formidable skill set.

Todd has performed for tens of thousands of people throughout his career and has toured or played with rock legends such as Stephen Pearcy of RATT, George Lynch of Dokken, Tracii Guns of L.A. Guns, country act Nathan Wade and the Un4given, and guitar maestros Mark Zavon of Kill Devil Hill and Neil Zaza. He has been featured in national and international publications such as Rolling Stone, Metal Edge and Drum magazine and has garnered endorsements from drum manufacturers such as Sabian and Taye. Todd is also the co-founder and drummer for JRZ System, an instrumental trio featuring Todd on drums, bassist Troy Johnson and guitarist Mark Zavon. Todd can currently also be heard drumming for one of Omaha’s most sought after cover acts Hi-Fi Hangover and in the Midwest’s premier Journey tribute band ReCaptured.

Todd has also become the most sought after instructors in the area. With emphasis on mastering syncopated rhythms and instrumental rudiments as well as drumming techniques for coordination and independent limb movement development, Todd is the perfect instructor and mentor for aspiring drummers or more experienced players looking to expand their skillsets.